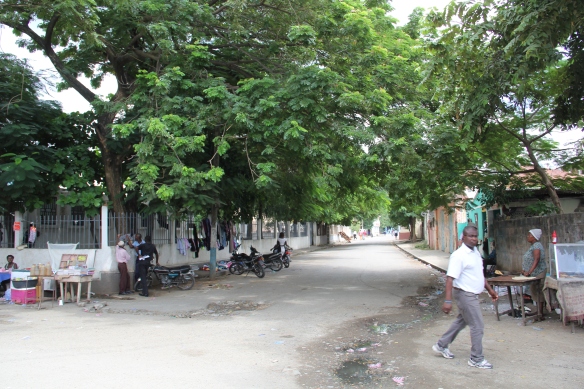 Today* I met David (I can’t show his picture) . The others have been speaking of him and I got my first chance to speak with and hear his story. We chatted as we made our way back to the centre of town. He lost both his arms in an accident. He was working with high voltage cables and received a severe shock which set his limbs on fire. At the hospital without knowing or without been asked, the surgeon removed both arms at the elbow. That was two or three years ago, now but he still feels pain. He says “My arms are dancing” which might be what we describe as pins and needles. He was particular distressed that his favourite uncle had died the previous day in Port O Prince. He just heard. David speaks four languages English, Spanish, French and Creole and is clearly very intelligent but won’t be able to work. he is unlikely to get a job he would be considered cursed. People have told him, with his obvious disability, he should beg on the street and make some money that way, but he refuses. “I will not beg” he says, “I trust in God and I know that he will supply my every need” When I practice my creole and ask him how he is ” Koman ou ye?” he replies “M’ bien avek Jésus “