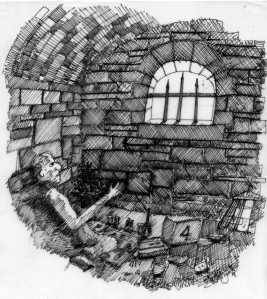 Sin is a troublesome word. Like so many words in our vocabulary its meaning changes over time it mutates and takes on other baggage and selective nuances so that it can mean quite different things to different people.  Preachers and communicators of the bible often struggle with this and try hard to find a new word or words that would resonant better with the original meaning. Rebellion is one, missing the mark and being messed up, are others. The problem, of course, is the word itself and the idea it imparts. It is offensive. It is the implicit suggestion that there is something wrong with us – whoever we are. That cuts to the core of our self.  It is a blasphemy against the ego.  It is strange that there is such a revulsion against this approach when we are very relaxed about using the same approach with other more acceptable wrongs.  The first step on the recovery from drug addiction, alcoholism, sexual offending, or any socially recognised disorder, is to admit it.  No one has any problem with that. Yet we have enormous difficulty in owning up to this core problem.  Preachers, who have tried to avoid the issue for fear of coming over too censorious or self-righteous, or worried that it presents too bleak and pessimistic a view of humanity, have not helped either.  The focusing on nice things like the celebration of love and positive affirmative strokes, to the ignoring of this essential truth in the Christian faith, has been disastrous.  Because acknowledging the reality of sin is one of the most liberating and essential parts of the good news.  Now we understand that there is a reason for the way things are. And that must be good to know. Pretending that there isn’t a problem or that it is one that with enough willpower and the right conditions we can overcome is pure fantasy. The Gospel, on the other hand, exposes the problem and reveals the solution. But of course it is not the small slightly naughty unimportant thing that it is so often made out to be. It is not just about making bad decisions or errors of judgement it is deadly serious, more than deadly serious. Sin at its core is a vile, corrupting and corrosive thing. It is not good. It is destructive and left to its own will continue to degenerate and destroy all and everything in its path, everything that is good. It contaminates everything and seeps through the personal, the social and the institutional. It is that bad. It is that serious.

This, of course, begs the question, if it is that bad why has it not destroyed good already after all it has had plenty of time to do that and yet good still seems to survive.   Many, I suspect, would believe that it is because humanity is essentially good, that evil with all its manifestations is a temporary blip and that in time this unfortunate character trait will be resigned to history.  But, to hold on to this view must take extraordinary faith and a remarkably optimistic view of human nature without any real evidence to support it.   The reason, I believe, good continues to survive, is because ultimately it is to do with God. He is good and merciful  and he has put in place at certain times restrictions so that we do not yet destroy ourselves -The angels with the flaming swords at the garden, the confusing of the languages and scattering of the people on Shinar’s plane, the flood and other events throughout history. He also chose a man and a family and a people to be witness of him and tell the world. He gave them the law in the Ten Commandments and other regulations to help them in their approach to him and in how they relate to each other. Finally he promised and sent his son, who would be the one who would reconcile people to himself and once and for all deal with the problem of sin.

Last night I was sitting with the small group of internationals, who meet each week in our home. They come from countries in all parts of the world, with backgrounds in all types and shades of faith. It is a precious moment in the week.  After sharing a meal, we spend the time reading, studying and discussing the bible. We had just begun to read through Paul’s letter to the church in Rome and it is hard to describe the sense of joy and liberation as we touched base with the cosmic reality of the Gospel of Jesus Christ.  The dawning of this truth is like a massive door being opened to let light flood into a stale and dingy room and we could understand why Paul was able to say “I am not ashamed of the Gospel for it is the power of God for the salvation of everyone who believes”.