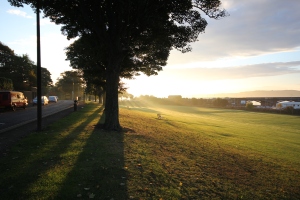 I watched a film on TV the other week and I regretted it long before it was finished. I enjoy watching films and it’s something I hadn’t done for a while. I felt in the mood but sad to say this was a total let-down. It was described as in the “West Wing mode” and starred Clooney et al but I hated it. It had a pretty thin storyline and I couldn’t find any character who was remotely likeable. It was all about ambition and cheating and cutting each other’s throats, but what wearied me was the tone of the whole thing. It was not violent and there was no gratuitous sex but the language throughout turned my stomach. It caused me to think again about why bad language, or what goes under the title of strong language, is a serious issue and perhaps symptomatic of our condition. The crux came late on when the president, on discovering he had been exposed, cursed under his breath “Jesus  f……..    Christ” I felt shiver run through me. It was the casual way that a blasphemy could be uttered with no thought of the one whose name was so casually covered in excrement and dumped in the gutter.  And I wondered why people swear and what they get out of it.

What we used to call foul or profane language, has been reclassified as  “strong” or “colourful” language and its use can be justified, if you feel strongly enough about something. It shows that you have some feeling and some passion about an issue. It is justified by the emotional relief it brings the user, as in “lalochezia”.  It gives you street cred and shows that you have the common touch. Even the Prime Minister slips some into a speech when he wants to make a point. But you just have to think about the categories of words that are used to see what this is really all about.  On the one hand they are words for sexual organs, sexual intercourse, for urinating and defecating, and they are used often with aggressive, sexist and racist overtones with more than a passing hint at rape and sexual violence. On the other, they are names for God for Jesus Christ for the Holy Spirit and sometimes combined with words from the gutter as in the film quote. Why?

Now I know some will immediately respond  “Oh come on, you are a wee bit sensitive here, these are just words… words.. words …you are making such a fuss… your reaction to them is totally out of proportion… you are so concerned with the obscenity of language  rather than the real obscenities that exist in the world”,   Others would go as far as to suggest that if you are concerned about “bad language” it is a sign that you are quite relaxed about all the other evils. But nothing could be further from the truth.  You wouldn’t employ that logic in any other context. Language when it is abusive, inciteful, or discriminatory is taken very seriously, even criminal in some instances. The names you might call people of a different race, gender, age, religion, sexual orientation, disability or anything that is different from you do matter and it reveals your attitude to them. It tells what is in your mind and that is one step away from doing. It is not a flippant thing. The words that come out of our mouths in a moment of untamed anger or frustration or passion can betray deep feelings inside us. It is deadly serious. It is not significant that the Psalm writer prays “Let the words of my mouth and the meditation of my heart be acceptable in your  sight, O LORD, my rock and my redeemer” because if the thoughts and words are acceptable to God, then the actions that follow will be too.

Tomorrow morning I will be joining the long queue, shuffling through the cattle pens, waiting for inspection before committing myself to the belly of a giant silver bird on a long haul flight across the sea.  When I have travelled before, it has been to the east to Europe, Israel, Nepal and China, or south to Zambia. This time I am flying across the mighty Atlantic to the western edge of the “New world”, to Peru.  It was an idea half conceived more than 40 years ago and inspired by a friend who on completion of his studies began his life’s work of translating the bible into indigenous languages of the Andes, principally into Quechua the ancient language of the Incas.  It, of course, begs the question “Why would you devote your life to translating a book into a relatively obscure language?” But to ask the question, itself, misses the point, or rather two:

The first is that the bible is not a book but contains all that we need to know about God, ourselves and the cosmos, the starting point for all other explorations. It is the “Word of God”. It communicates what God has to say about who he is and who we are. It is not, in one sense, easy to understand, but like a giant picture with extremely fuzzy edges, (read some of what is said in Genesis and in Revelations for example) when you focus on the centre: moving from all the people to one people, to one person, to one life of 30 years, and specifically, to three days at the centre of history, then its cosmic relevance is revealed.

The second is that, while it is bedded in the culture and language of the period, in which it was written, it transcends these. While it is rooted in real time in history, it speaks to all time. While it begins in the specific geography of the Mediterranean lands, its impact reaches across the globe. While it was inscribed in Hebrew and Greek, it is read and understood in thousands of languages. It is not difficult to see the significance for a Quechua speaker in the high Andes, being able to read the bible for the first time in his own language rather than in the language of the foreigner or possible oppressor, in the same way that native Gaelic speakers were able to do the same in the early ninety century in Scotland. The pragmatist would say “why bother? If you want to read the bible, learn English or Spanish or Latin or Greek”, but that of courses misses the point.  God speaks in words and pictures we can understand. God is speaking and he speaks to me, right into my situation, now, in my mother tongue.

But I have other reasons for travelling. My early fascination with the Incas made me scour the library for every book I could find on the subject and I poured over John Hemming’s “The Conquest of the Incas” I even had a strong feeling to travel and work in Peru and made pathetic attempts to learn Spanish, through a linguaphone course, which had to be donated to the library after a few months. Years later a young Peruvian man from the barrios in Lima came to stay in our home. He had volunteered a year of his life to help in the local church and community and it was not long before everyone, young, old and in between, took him to their hearts and thought the world of him. He brought and gave so much it would be hard to put into words what we learned from him. When he left he was sorely missed and he still is. As we parted at the airport on a grey Edinburgh day, I expressed the hope that sometime soon I would be able to come over and visit. Now several years later that hope is being fulfilled.

As I make my final preparations: thinking about the ancient Incas, their incredible story and anticipating seeing the amazing sites at Arequipa, Titicaca  Cuzco, Ayacucho and Machu Picchu, thinking about the long awaited reunion with my friend, meeting his family and church and seeing something of his life in Lima and thinking of the stories we will share, I can’t help feeling that the story which will eclipse them all will be the one about bringing Gods word to all peoples.

English is a very beautiful language but it is also a very powerful one.  In many ways it almost dominates the world, though the English speaking people (those for whom it is their mother tongue) are a relative minority.  It is also changing and evolving all the time and this process keeps accelerating and seems unstoppable.  New words are added to the dictionary every year, others are dropped and become anachronisms.  Nouns become adjectives (relation – relational) and verbs become nouns (transition – to transition). Sometimes the meaning changes to the opposite of the original meaning (wicked). Often politics changes the name to change the attitude (same sex marriage – equal marriage, spare room subsidy – bedroom tax) once the new name has been accepted the argument is won. It has all been said before, of course. It was in 1945 that George Orwell wrote his essay “Politics and the English language” and it has lost none of its relevance today.

Now and again you come across examples that in their passion for gobbledygook and meaninglessness, take the breath away. Here are four that came across my path recently.  1) Is a Wikipedia entry on Alan Hirsch, a contemporary Christian writer, 2) is my memory of what one individual said at a recent meeting. I was so captivated by the number of idioms strung together in a meaningless stream, I just had to write them down afterwards. 3) is Sir Humphrey from a transcript of BBC’s “Yes Prime Minister” and 4) is the instructions on who should sign a Building Standards Completion Certificate form.

Probably Hirsch’s most distinctive contribution was to articulate what can be called a phenomenology of apostolic movements. By probing the question of what comes together to create exponential, high impact, multiplication movements, he came up with the concept of what he calls ‘Apostolic Genius’ which is defined as “a unique energy and force saturating phenomenal Jesus movements.” Hirsch defines it elsewhere as “the built-in life force and guiding mechanism of God’s people. As to its phenomenology, it is made up of the symphonious interplay between six core elements, or “mDNA”.

Frankly there has clearly been a series of systematic and systemic failures and a litany of abuse that beggars belief. We have been avoiding the elephant in the room for too long and so we need to grasp the nettle and bite the bullet and carry out wholesale root and branch reforms, bringing forward a whole raft of measures and putting in place a series of robust safeguards with clear blue water between them. It will not be a silver bullet but we need to be singing off the same hymn sheet because the devil is in the detail. Now I would hold my hand up and be the first to admit that we don’t need to teach grannies how to suck eggs and we don’t want to re-invent the wheel, but it’s not rocket science.

It’s a bluff I probably wouldn’t use it”

“They probably certainly know that I probably wouldn’t”

All of the four, except one, are serious pieces and here is the question, which is also a serious one: Is it possible that that the English language will continue to change and evolve in an increasing rate and to such a point, where it becomes impossible to stay ahead or understand and then it becomes useless for communication and in future years become a dead language?

What do you think?