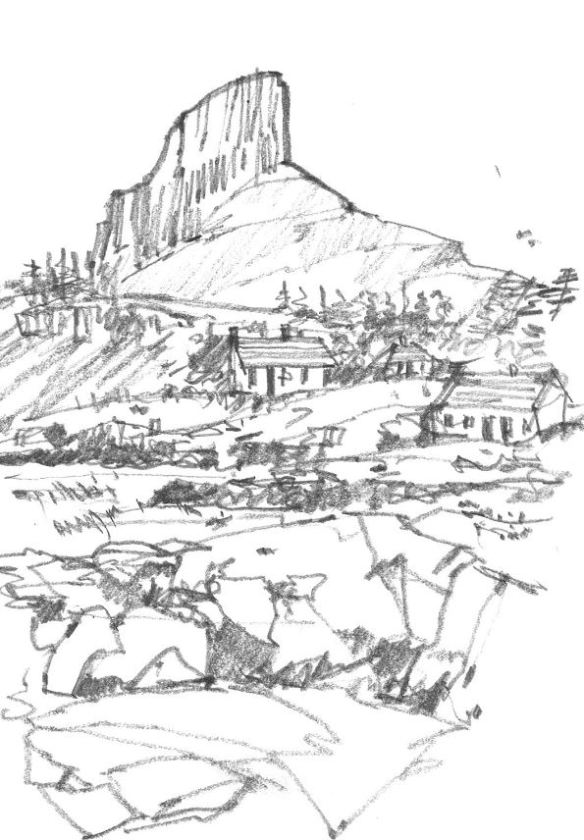 Later he took me fishing. We borrowed a dinghy from the shore and set off round the coast on a balmy summer evening. Iain was at the front rowing, I at the back, occasionally bailing out the sea water that seeped through the clinkers. We caught no fish but had a great time. Leaving the jetty and castle island far behind, we explored the Grulin coast from the sea, rowing into tiny inlets and scraping the keel off the rocks as we looked for a good place to land. On the shore we collected buoys and odd bits of flotsam that they sea constantly threw up. We spotted a yacht moored not far from the shore and went to investigate. The man on deck was friendly. He was fishing too but catching and he invited us on board. The little yacht was magical inside. A tiny kitchen and a tinier bathroom, a little lounge with portholes, a low table with a bowl of fresh fruit. All brass and polished wood, fitted together perfectly with no space wasted and a warmth and luxury that entranced us. We were entertained for ages with tea and stories of their escapades around the western isles. The previous year they had moored in the harbour and were trapped on a sand bank. We didn’t notice the time nor the boat gradually rock to and fro and it was only when we were about to leave clutching our gifts, a week old Scotsman, a banana and two mackerel, that we became aware of the serious squall that was building up. Rowing back into the wind was hard.  The storm was growing in strength and at times we seemed to be hardly moving at all. The boat rocked and we were repeatedly soaked when waves crashed against the side. But to a little person it was still fun.  Iain was struggling to get to the bay so we decided to stop over on Castle Island in the hope that the storm would slack. It didn’t, it looked like it was getting worse, so we made one last dash for the harbour. It wasn’t far but the sea was now at its wildest. Finally after a mammoth struggle Iain pulled us round into the calmer waters of the bay where a crowd had gathered to welcome us.   Later we learned that the whole island were alerted and in a state of alarm. Several boats had been out searching for us. They had been scouring the shore for the missing sailors and were beginning to fear the worst. Years later, I understood the very real danger that we were in and how close to tragedy our little expedition was, but the thought didn’t bother me then, nor now. I was with my big brother and I knew it was going to be ok.