It was the school that brought me here and, as always, it’s great to have a specific job to do. The site has been purchased and significant funds raised. The design has been finalised and it’s now a question of resolving constructional issues and procurement. This,for me, is uncharted territory.  The architecture in the town of Ounaminthe does not inspire. Buildings are almost exclusively in concrete reinforced and in blocks, generally haphazard and incomplete with a tendency towards kitsch which becomes extreme in the larger houses and hotels. Concrete allows any amount of hideous frivolity. The streets however form a grid and there are parks and squares to give relief and the whole,  saved by the furious growth of all kinds of trees which makes the city breath with a Caribbean lushness set against the craggy tree lined mountains. The media impression is that Haiti unlike the Dominican Republic is a deforested desert wilderness. This is not the case as almost 1/3rd of the land mass is forest and the mountains are covered in trees. Where there has been deforestation this has been blamed on charcoal production but again the situation is more complex.

We visit some buildings and to see how they are constructed. One was an active building site. Formerly a house,now a school. A roof is being finished on the first floor with classrooms underneath These have bare block wall with vents, tight bench rows, and a blackboard (actually green).  There are no children as this is Saturday and the school is closed for the weekend. The only resource I see are mathematic text books in French and Creole and a computer room. The building is three storeys and, with the exception of the roof, built entirely of concrete. On the building site health and safety is given no quarter. The top floor is very high off the ground and a home made ladder bends it’s way to the ground at a terrifying angle. What terrifies me more however is how this building will cope in an earthquake. A tremor could cause it all to cave in on itself and the prospect of these concrete floors descending on packed classrooms below is too awful to think about. This is not how we will build the school. 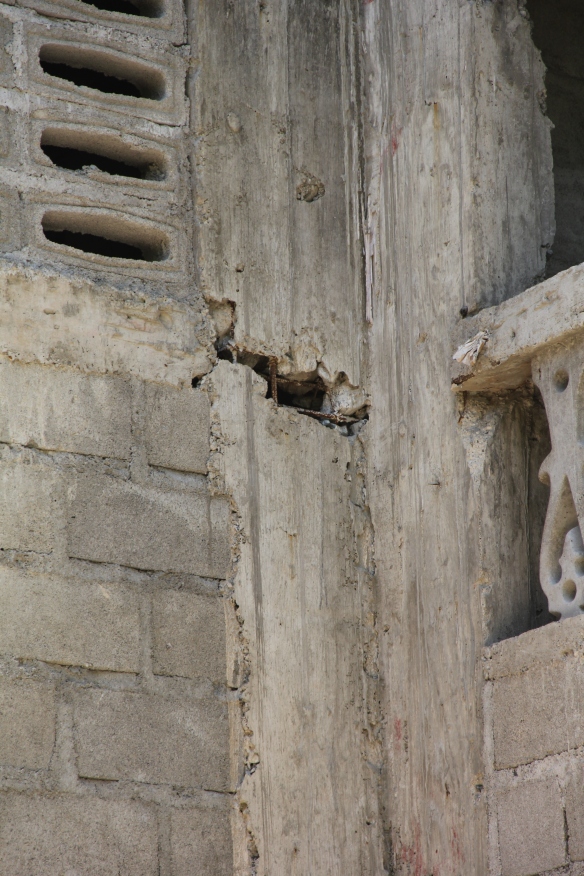 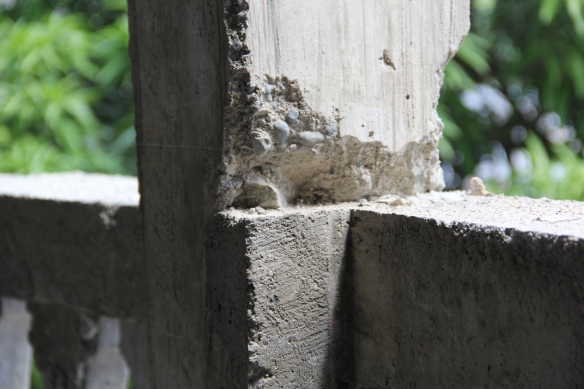 Later in the week we returned to see the school in action and stayed there for three hours. It was an amazing spectacle seeing hundreds of children in smart uniforms lining up for their classes and rounded up by stern teachers in immaculate grey uniforms with a belt in the hand which they used without hesitation, giving a child a smack across the ankles to get them moving. It reminded me of sheep being herded into pens but it didn’t make a lot of difference to the children who just took it in their stride and it clearly didn’t hurt. The playground was supervised by a man in a blue uniform also welding a belt. This time it looked more serious. It was made of leather like the Scottish tause and if there was any doubt about how serious he was, a rifle was under his arm and hand cuffs hung from his side. Security in and out of the playground was tight and parents had to demonstrate their authenticity before being allowed in to collect the children. The younger children were dressed in pink, the older pupils in grey and blue while seniors wore grey skirts and trousers and white blouses emblazoned with the emblem of the school “Institute Academique de Saint Israel”.

The school has over 1,100 pupils and 25 teaching staff. I did wonder, if, in the longer term these children may have greater prospects than the children brought through the system in the UK. I just wondered. Haitians who can, and who have opportunity to, often leave for the Dominican Republic , the USA and most recently Canada, but the prospect of an educated population remaining to live and work in their own country could transform the nation economically, socially and culturally beyond all recognition. That is the hope and that is the main driver behind the project.