GETTING USED TO IT

It as amazing what you can used to. The dismal dribble of water from the tap in the hand basin, the hit and miss electricity, the teasing hint of WiFi, the dust and rubbish, the incessant thumb of dance music pounding out at all times of day and night and even the heat and humidity, which you think your body could accommodate to, given time. But there are some things you just can’t get used to. 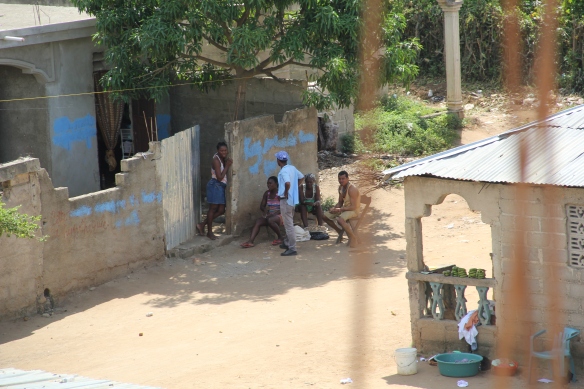 I went with the  Pastor and Richard on my first, and only, home visit this time round. The pastor had identified some families who were particularly needy and so we purchased some food, a bag of rice, pinto beans, a tin of tomatoes, some biscuits, stock cubes, spaghetti and a jug of vegetable oil and took them to the home of a member of the church. I didn’t hear her full story but learned enough to know that her situation was desperate. We drove through the dirt streets, tightly packed with dwellings constructed from wood, corrugated iron, tarpaulin and rags and sometimes cardboard. It was shocking. We passed an open space piled with stinking garbage and smouldering fires, picked over by goats and chickens with a desultory donkey tied to a burnt out tree. Where there were flood drains at the side of the road, these were always full of rubbish, plastic bottles and polystyrene food containers. The smell at times was overpowering with slow moving and stagnant grey water and a strange black mould growing.

It was late in the afternoon, with darkness approaching and the air was tense. A group of young men gathered at the corner showing off the one possession they could boast of, an enormous speaker blasting out music. “We may have nothing, but we have noise” was the message. We left the car and followed the lady to her home up a narrow lane with all eyes on us and the odd cry of “Blanco”. When the children shouted to us in this way, it was with a smile and laugh. We laughed too. Now it carried just a hint of menace. There was suspicion in the eyes and a threatening body language. The home was the size of a garden shed divided into four for four families. We followed her round to the back squeezing through a gap in the corrugated iron. She parted a torn curtain and we deposited the food on the dirt floor. There was only a moment to take in the scene, a bench, a plastic bucket with clothes and a dish of beans. We spoke for a moment or two and then left. We didn’t pray with her and I am not sure why, but the pastor was anxious for us to be going. “This is a dangerous place” he said. I did wonder if picking her out for this food parcel might make her life even more difficult or if some of the watching eyes would pounce once we had left. I prayed that they wouldn’t. Earlier Richard said the visits are the best part. They were the worst. I was seeing things that I didn’t want to see.

Last night I slept in a hotel close to the airport transiting through the Dominican Republic. It was not the one I had booked but because of a mix up of dates the taxi driver found me another. I had a room to myself almost 10 times as big as the ladies home. (I measured it). I had free access to an all-day buffet, eat and drink as much as I wanted, beer and soft drinks in the fridge, a choice of three swimming pools and a private beach.

Watching the Caribbean dawn break spectacularly through the parting clouds of petrol blue, chromium and gold, I knew this grotesque divide was one that I could never ever get used to.

1 thought on “Postcards from Haiti 10”