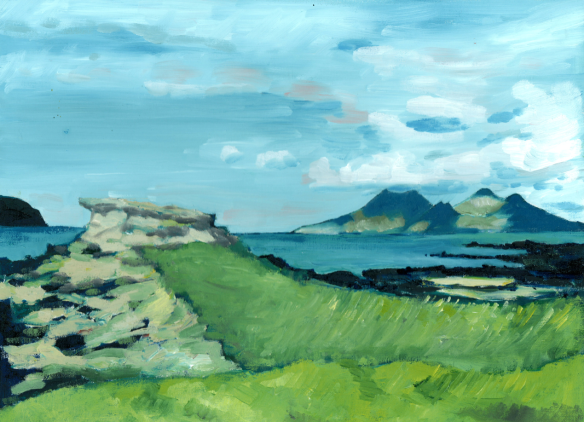 This summer I made a trip to the island which was my home throughout most of my childhood. It was an inspiring suggestion by my sister and on her persistent promptings, my siblings and I with other family members made a sort of pilgrimage to “our” Island Eigg, which is part of the small isles just south of sky and off the coast of Morar.  Though I was there for less than 48 hours, the mountains of memories that resurfaced in that time, were so tightly packed in, it would take some time to unfold them, lay them out and to properly record them in words or pictures. We left the island more than 50 years ago and while much had changed over that time the surprising and startling thing was how much had stayed the same and how much was instantly recognisable. There were memories of school days and playing, of feeding hens and collecting milk, services on Sundays and boat journeys between the islands, target practice with air rifles, rabbits and fishing for trout, constant walks, heather fires, adventures and discoveries along cliffs, across beaches, through woods and in caves and each brought to the surface by a turn in the road: the wet of the bracken, the sound of the burn, the hazels under the cliff, the smell of the sea, the warm summer wind across the machair, and the ever present Squrr, a strange volcanic plug, a single rock towering and dominating the island from almost every angle. Like a cat, she would sit upright inspecting those who were arriving and leaving the peir with a slightly threatening  air, from Gruilin she would be ready to pounce while from Howlin, on the north, laid out in her full length wanting just to be left alone to purr herself to sleep.  It was and is a truly magical place.

Before the magic spell was broken and we moved to the city we had to leave the large manse for a small cottage in the north of the island.  The manse was a rambling three story house that could easily have been the house that Robert Louis Stevenson had in mind in the opening chapter of “Kidnapped” Most of it was unfurnished and empty but it did have hot and cold running water and calor gas to provide light to some rooms. The cottage by contrast was tiny with no sanitation, save for a dry toilet in a shed outside and water from a tap in a field 50 yards away, collected in a cracked enamel pail.  The change in circumstances was as stark as it was significant. The neighbours in our previous locality were the doctor, the factor, the estate manager, other significant worthies and the laird himself.  He was an absent landlord and for most of the time he was just that; absent.  Now we were living with the common folk in their crofts dotted about the glen under the lee of the cleadale cliffs. At one time we were living with the nobility in a relatively charmed existence serving the community, now were among the ordinary people. At one time we were the ones who were generously offering our help now we were the ones receiving it, as on a dismal wet November Sunday, when, having walked back the miles from church, cold and soaked to the skin we were met at the door by our nearest neighbour bringing an enormous pot of lentil soup with a large ham bone and a steaming clouty dumpling. Later our mother had said that it was the time spent in the cottage that was among the happiest spent on the island. For the first time, it was if she felt she belonged.

It took me some time to finally identify the cottage. It was just off the road with a path down to the beach at laig now refurbished and with a large extension but unmistakable, all the same. Later with the sun breaking shadows over on Rhum and the wild grass dancing across the field, I replayed the scene of 50 years ago in my mind and I realised then that it had far greater impact on me and then I could possibly have imagined.